Technology and know how, energy and information…. A conversation “without any mental frameworks” with Samuele Mazzini about a time of ground-breaking change

After fifteen years of solutions planned for any kind of industrial sectors, is the “Multiple rotor transmission” – that is to say the product that has given life to the company branch called IET, Integrated Electric Transmission – maybe the most important patent in the important career of Samuele Mazzini?
That’s true, a hit like that happens once in a lifetime. And I must admit that it was born by chance some years ago: at that time it was an upstream idea, the market wasn’t absolutely ready, it would also have been easy to make a poor showing being a fake or “patàcca”, as they say in Romagna… But the different tests proved that it could really be a revolutionary system, and I have kept on believing in it, investing time and energy. The result is an extraordinary product, as we have patented it basically everywhere: even in the United States , where it is extremely difficult to have a foreign patent approved. The paradox is that now we have to hold back waiting for the market pace, keeping a suitable dose of self-control. But it’s OK anyway, this is a product that will give a sparkling performance in the next ten years’ time …

How can you be so sure?
Because the world of transport is changing very quickly. Due to technology and to the possibility of using new power supply sources in comparison to fuels derived from oil, in a few years’ time the field of vehicles will no longer be based on the internal combustion engine, and everything will be different all of a sudden. So far, if you think about it, the evolution of vehicles has been based on just a few novelties at least at a true research level. We always start from the engine that is similar to the one of the origins and from that the rest of the vehicle is developed, from the axle to the wheels with almost standardised proportions. But making one’s name in the global market of vehicles fuelled in different ways – and therefore completely different even as far as their size is concerned- will blow up the usual reference points: we will think without any kind of framework, there could be, let’s say…wheels with one metre diameter, machines made in a complete different way from the current ones. And in this ground-breaking change, I think that our systems could have an important space. That’s why I think pink.

Let’s step back, at this stage. Beyond the passions for engines, beyond “luck”, which are the ingredients to get to such an important patent?
Our basic ingredient is the taste for research. I am talking about research, attention, not just about simple innovation: innovating means renewing an already existing machine by the means of new details, and many do this; but research is completely something else, it’s what leads one to create brand new tools, but it needs commit-ment, on-going tests, resolution and fantasy…… Then the ability to use research going beyond the simple request by a single customer is important. When I estab-lished SMRE together with my wife, 16 years ago, my basic idea was to create a de-sign studio for industrial machines aimed at problem solving: I like the idea of solving problems, and of being able to do this in different fields. Our strength was treasuring any kind of result: we have created such a wide internal know-how solutions, enabling us to pass experiences from one field to another, as we were butlers.… This also comes with having a suitable archive, an organisation able to store all the researches, all the experimented applications, in order to get them back – even as starting points- each time one needs it.

Therefore research is not just a matter of money…
This is the easiest of the possible mistakes and many do make it. Investments mat-ter, of course, but money is not enough to realise new technologies. The value of a company nowadays does not lay in the turnover, but in its know-how: one is valued on its potentiality, on the technological positioning in comparison to a given period. And this dismantles both the industrial and economic “habits” of the last 150 years. SMRE too now enjoys this logic: due to its patents the company is worth much in comparison to what is stated by the simple turnover, as the Americans have been teaching us, evaluating technological companies much beyond the usual parameters holding the importance of know-how and the research projects they have in great consideration.

In a little more than 15 years, starting from the problem solving, you have get to electric propellers of the future. What will happen to SMRE in the next 15 years?
It’s hard to say that in details. What is sure is that the world is rapidly changing: nowadays the core matter of the market is not in the products but in the information. I think that the main future business will be transactions and energy: I have other projects in my mind then, but now it’s not time to talk about that still… 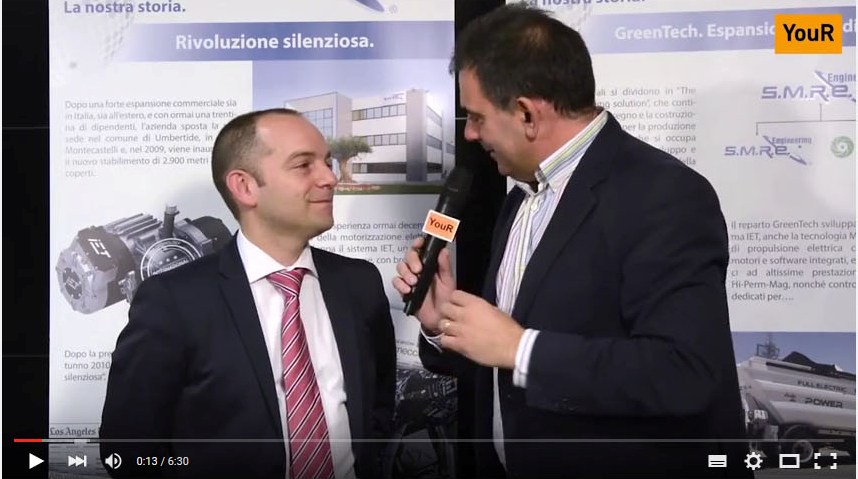